AN ORDINANCE OF CITY OF ALLENTOWN, LEHIGH COUNTY, PENNSYLVANIA ESTABLISHING AIR QUALITY MONITORING AND EMISSION STANDARDS AND PROVIDING FOR CRIMINAL AND CIVIL PENALTIES AND OTHER ENFORCEMENT ACTIONS

WHEREAS, the United States of America Clean Air Act, as amended, including Amendments of 1989, and the Pennsylvania Air Pollution Control Act of January 9, 1960 (P.L. 2119), as amended, provide in part for the better protection of the health, general welfare and property of the people of the Commonwealth by the abatement, reduction and prevention of the pollution of the air by smokes, fumes, gases, odors, mists, vapors, and similar matter, or any combination thereof; and

WHEREAS, the Federal and Commonwealth Legislatures have granted the power to local municipalities to adopt more stringent air pollution standards than those provided within the cited Acts, as affirmed by the adoption of section 12 of Act 95 of 1992, 35 P.S.§4012; and

WHEREAS, local municipalities have thus been empowered with the right to enact ordinances in protecting and preserving the ambient air quality; and

WHEREAS, Allentown’s ambient air quality is a matter of vital concern to the residents of the City; and

WHEREAS, the City of Allentown is of the opinion that increased introduction of air contaminants within the City would have an adverse effect on the ambient air quality; and

WHEREAS, the City of Allentown has determined that the impact of increased air contaminants should be borne by those introducing the contaminants; and

Delta Thermo Energy Corp is planning to construct an incinerator at 112 W Union St in Allentown. This incinerator will burn garbage and sewage sludge in Center City Allentown, near the East End of the city.

The burning of garbage/sewage has been determined to release sulfur, mercury, lead, carbon dioxide, and dioxin. According to census data, the community surrounding the planned incinerator is 60-85% Latino and African-American (see map below). Delta Thermo intends to release these toxic chemicals into the air and water of one of the most racially diverse working class communities in the Lehigh Valley.

Delta Thermo says the incinerator is “clean technology,” but theirs is the first of its type in the world and has never been tested for pollution before: Delta Thermo Energy is using you and your loved ones as test subjects for their experiment with this “new” incinerator.

We need your help! Several Allentown residents are coming together for a presentation and discussion on what to do next. Mike Ewall from Energy Justice Network will share his expertise on the hazards of incineration and lead a Q&A and discussion on the issue.

PLEASE JOIN US… and spread the word!

Find more info on the project here: http://stoptheburn.org
For info on why incinerators are so dangerous: http://www.energyjustice.net/incineration/ 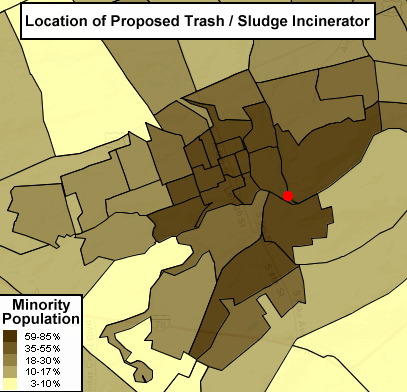 Click here to read the full article in The Express-Times

“Allentown has no control over any aspect of the operation of the facility, including monitoring, maintenance or problems that may arise if this untried technology fails,” [Julie] Thomases said during a city council meeting tonight.

END_OF_DOCUMENT_TOKEN_TO_BE_REPLACED

On March 29, 2012 Allentown signed a 35-year contract with a private NJ company, Delta Thermo Energy (DTE), to build an incinerator on Kline’s Island in Allentown for disposal of the city’s trash and sewage sludge. The incinerator will be generating electricity from the heat generated in the combustor.

The EAC was briefed on the DTE process multiple times starting in 2010 by DTE’s company principals, Mayor Pawlowski, and advisors on the project. The EAC has done its own research which included consultations with people knowledgeable in related fields. Allentown has no control over any aspect of the operation of the facility, including monitoring, maintenance, or problems that may arise if this untried technology fails. The contract requires the city to pay DTE millions of dollars per year for 35 years to process and dispose of the city’s trash and sewage sludge.

It is the opinion of the EAC that this contract puts Allentown at unnecessary risk for financial losses and environmental damage to the city’s air, water, and quality of life while discouraging the adoption of less expensive and environmentally healthier options for its waste.

END_OF_DOCUMENT_TOKEN_TO_BE_REPLACED

There is still time for City Council to STOP the DTE enterprise. This coming Wednesday 5/16, Council will be voting on an ordinance that accepts three million dollars of grant money for DTE.

Please come out to show council with our presence and by speaking out that we want them to not accept this money.