Conclusion quoted from the end of the Judge’s opinion letter:

As such, this court agrees with the conclusion of the Board. Timothy A. Benyo, Chief Clerk of the Election Board provided an explanation of the Boards’ August decision. He wrote that the Board found that the “City of Allentown Clean Air Ordinance, as proposed, does not properly recognize and account for the Department of Environmental Protection’s mandated approval role.” The proposed ordinance establishes an air pollution control program that is not authorized pursuant to APCA, 35 P.S. 4012(b) in that the City of Allentown is not a first or second class county. Furthermore, the proposed ordinance does not provide for or acknowledge the required application and approval of the Department in that the proposed ordinance is effective immediately. Therefore, the decision of the Board is affirmed and the writ of mandamus is denied. – Michele A. Varricchio, J.

Here is the latest news on our Clean Air Ordinance. The Lehigh County Commissioners are looking into the appeal process for ARCA to appeal the Lehigh County Elections Board’s rejection of our ordinance. Stay tuned.

“This is a real crisis of democracy,” said county resident Al Wurth, a political science professor at Lehigh University in Bethlehem. “The cancellation of an election is not something I thought I would read about in this country, much less my home county.

“I’m very concerned as a citizen of Lehigh County that the county is usurping Allentown’s sovereignty.”

At the city’s request, the Department of Environmental Protection has put together a letter dated today (6/19), the day of the city council meeting where city council gets to vote on the ordinance.  The letter was actually released earlier, as the city had it on 6/18, just in time to email to local reporters so they could write articles on this day of the vote, claiming that the ordinance is illegal.  The ordinance is NOT preempted by state law, as DEP claims.  Mike Ewall, Esq. of Energy Justice Network, author of the Allentown Clean Air Ordinance, debunks the DEP’s letter here.

See today’s news articles on this here, here, and here.

Please mark your calendars and do your best to make it to the 5/28 Committee of the Whole Meeting at 6PM in City Council Chambers, 435 W. Hamilton Street. Public comment on Bill 26: Clean Air Ordinance will be heard. Feel free to come and support our ordinance, and or address council. We hope to see you there! 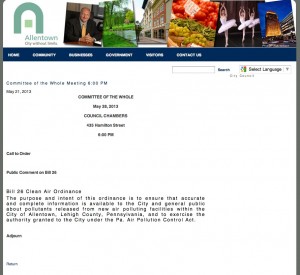 …if Allentown City Council doesn’t vote for it first.

The Home Rule Charter allows Council 60 days to pass the ordinance themselves.  Today – May 21st – is Day 29; they have until June 21st.  The Ordinance was introduced at the May 15th Council meeting, and will be discussed (and open to public comments) at a Committee of the Whole meeting.  Stay tuned for that date!

So simple, yet so satisfying:

“The City Clerk’s Office has reviewed your petitions and found them to be sufficient.”

Meaning that more than 2,000 of the 3,500 signatures that we collected turned out to be from registered Allentown voters. *whew*

This means that City Council has 60 days to adopt the Clean Air Ordinance themselves. If they vote against it or fail to consider it for 60 days, the Ordinance can appear on the ballot in November and the citizens of Allentown can adopt it.

To everyone who petitioned: Great job! You’re making democracy possible.

Special thanks to Mike Hanlon, Tawanna Whitehead, and everyone who helped the City Clerk’s office in the painstaking task of verifying the signers.

URGENT: The final 10-day Clean Air signature sprint starts TOMORROW! The city just confirmed that 1,376 of the 2,100 signatures we turned in are valid.

More Than 2,000 Signatures Have Been Submitted for Allentown Clean Air Ordinance Ballot Initiative

Allentown Pa. – On March 16th, Allentown residents delivered over 2,000 signatures successfully gathered by the filing deadline for a ballot initiative in an effort to place their drafted clean air ordinance on the Allentown ballot in November.

The Allentown Clean Air Ordinance, if passed by the voters in November, would require around the clock monitoring of emissions from new waste burning facilities, while capping the kinds of emissions that can cause cancer, asthma, and COPD. Under Pennsylvania’s Air Pollution Control Act, towns and municipalities are allowed to pass stricter air pollution laws than state regulations.

Allentown Residents for Clean Air and the petition drive were organized by Allentown residents with the help of Energy Justice Network in response to Mayor Ed Pawlowski’s trash and sewage sludge incinerator proposal. The facility has been contracted by the Mayor and City Council for 35 years, but is still embroiled in a legal dispute with the state over their permit, and may not yet have adequate funding to move forward. If built, Delta Thermo Energy, a New Jersey company, would burn 100 tons a day of city trash and 50 tons a day of sewage sludge. The incinerator would be Delta Thermo’s first and would be classified as an experimental facility due to a novel combination of three technologies that would allow the operator to skirt state regulations.

In addition, the 35-year contract would create a disincentive for the city to prioritize waste reduction efforts such as recycling and composting that would preclude the need for both landfill expansion and incineration. Allentown Residents’ goal is to pass strict monitoring requirements and an emissions cap on pollutants like carbon monoxide, acid gases, volatile organic compounds, toxic metals, and dioxins such that Delta Thermo and investors would no longer be attracted to Allentown.

“It’s just common sense to expect an experimental waste-burning operation to use modern equipment that would tell us what is really coming out of their smokestack, and for their emissions to be as clean as they claim,” said Mike Ewall of Energy Justice Network. “However, this company is fighting the state, not wanting to comply with the most minimal requirements set in their permit, and wants even lower standards. I have no doubt that if we pass a reasonable clean air law, irresponsible companies like Delta Thermo will chose not to build their polluting experiment in the city.”

“We’ve been talking to many parents of kids with asthma, and others who suffer from the air pollution we already have. Burning 150 tons of waste each day in the heart of the city can only make things worse,” said Rich Fegley. “Alternatives like recycling and composting create 10 times more jobs than burning or burying waste. We can do better. In fact, San Francisco just reached 80% diversion from landfills and incinerators – a direction Allentown should try, rather than pick the dirtiest and most expensive way to handle waste.”

If the city clerk verifies that the signatures are valid, the ballot initiative would be present on the November ballot, so that Allentown voters can vote on whether they city should adopt the Allentown Clean Air Ordinance.

The Energy Justice Network is a Philadelphia-based national organization that supports communities threatened by polluting energy and waste technologies. Taking direction from a grassroots base and the Principles of Environmental Justice, EJN advocates a clean energy, zero-emission, zero-waste future for all. On their website, EJN proposes their own Energy Justice Platform. 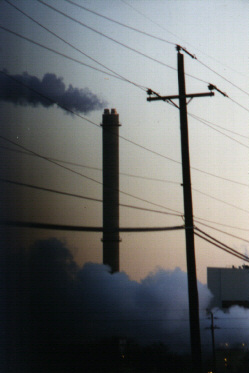 Incineration turns waste into toxic air pollution and toxic ash, which would be dumped in area landfills, making them even more toxic to groundwater than they usually are.

Incineration is the most expensive and polluting way to make energy or to dispose of waste. Real solutions like reuse, recycling and composting produce 10 times as many jobs as burning or burying waste. San Francisco just reached 80% diversion from landfills and incinerators through their zero waste program.

To learn about how toxic, dangerous, expensive and unnecessary incinerators are, see:

Allentown is threatened by a toxic incinerator that would foul our region’s air with poisons from burned trash and sewage sludge.

WE NEED 2,000 SIGNATURES BY MARCH 15th to put a Clean Air ordinance on the November ballot.

Come to one of these meetings to get materials and orientation to help the petitioning effort.

Can’t make it, but want to help?  Fill out this short survey: http://www.surveymonkey.com/s/Z3Y78F9

We also need petitioners to help with the following: